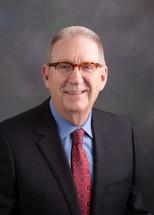 I am the senior member of Rehm, Bennett, Moore, & Rehm P.C., L.L.O.  I have been practicing since 1973 with extensive litigation experience. I worked as both a prosecutor and defense attorney. I was a founding board member of the Nebraska Criminal Defense Attorneys Association. I have prosecuted or defended 5 first degree murder cases to verdict.

From 1992 to 1993, I served on the Governors Workers Compensation Task Force and fought to preserve important workers’ rights such as choice of doctor. The task force provided the most recent comprehensive changes to Nebraska workers compensation law. Nebraska has had no negative reform since the task force bill was enacted.

In 1997 in joined Workers’ Injury Law & Advocacy Group, have been a board of director member since joining. I was an officer in 2002 and 2003. I have been a seminar speaker for this group in North Carolina, Connecticut, Montana & Washington D.C. events.

I grew up in rural Nebraska. My parents were a small business owner and a school teacher. I participated in sports, worked many physical jobs, and had workers’ compensation injuries. Hard work, organization and education were stressed. I grew up understanding and respecting working people. Becoming a lawyer was my career goal before I reached my teens. My firm represents only people– no corporations and I love what I do.